What You Didn’t Know About the Rhode Island Red Chicken

If you've finally decided to take the leap and raise a brood of chickens in your backyard, you may be feeling a little overwhelmed at the choice out there. You've done a little of your own research so far, and what you've come up with is that there are more breeds to choose from than you can count on both hands – and both feet. This means that in terms of deciding which one is a good fit, you've got your work cut out for you. While thinking about this, let's talk aboutone breed, in particular, the Rhode island red chicken, and see if they’re the kind that you had in mind.

Chickens come from all different kinds of places around the world, but in regards to the Rhode islandchicken, they're born and bred Americans. In fact, it's such a staple of the American agricultural landscape that it is considered a heritage breed by many. What's most interesting about the Rhode island breed is that they were initially bred with both egg production and meat in mind. However, over the years, breeders have, for whatever reason, decided to focus more on egg production than anything, and the meat genes have been slowly bred out of this brood so that they are now mostly used for producing eggs.

If you want to go back even further, you can trace the Rhode island breed back to Italy, where it was the result of cross-breeding two chicken breeds, Leghorn and Malay. Fast forward a few years, and you’ve got a middle America country scene where the Rhode island breed could mostly be found on Massachusetts farms. If you want to get your hands on this particular breed, you might need to move quickly – as more people are considering more commercial breeds of chickens, this particular kind is becoming less common in American’s backyards.

So, what does the Rhode island breed look like then? One of the things that makes this breed stand out from the rest is their deep red color, which some would describe as almost being black. They have a large, luxurious plume, and a large tail as well, which is a lot of the time completely black.

There are two different types of chicken combs within the breeds, and when talking about the Rhode island breed, you can find both the rose or single comb. While there is a variation here, whatever the comb looks like, it will always be a bright, distinctive red. The same applies to their earlobes and wattles. With their yellow feet and red-brown beaks, this breed is just about as typical of what a traditional chicken looks like as you can get.

The older varieties that coined the heritage title are typically larger than their industrial cousins, and their colors tend to be more striking as well. Additionally, if you come across a modern Rhode island breed, you'll notice that they typically weigh more and are taller. 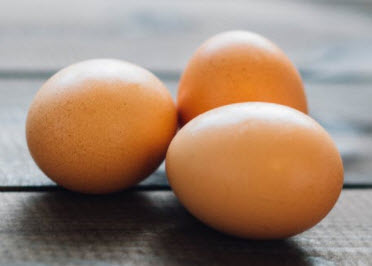 This is where the going gets good with the Rhode island breed. Just like we mentioned at the beginning, there are a lot of different chicken breeds to choose from out there, so you’ve got to be pretty specific with your requirements. So, if you are looking for a chicken that’s going to lay you a lot of eggs throughout the year, you’ve come to the right place.

The Rhode island breed is famously known for its high egg-laying numbers and can lay more than 280 eggs each year. In fact, they are known so well for their egg-laying abilities, that they have been given the nickname 'egg-laying machines.' Another impressive fact about them is that their eggs get larger every year, so if you have them around for a while, you can expect to get a bigger yield as time goes on.

Naturally, like with most chicken breeds out there, the Rhode island red might decrease their egg production a little bit during the colder months, but if you’re making sure that they’re getting lots of light in their chicken coop, this is a problem that’s easily remedied.

The Rhode island breed is an excellent egg layer – but you might not want to take them in as pets. They’re typically known for being quite territorial with their space, and not so loving towards humans. They’re also not well known for being broody, which means that if you are hoping to continue on your brood by creating another generation, you might want to go for a different breed. Heritage Rhode island reds were broody at some point, but this has since been bred out of them, just like their meat genes.

Based on their temperament and disposition, this is the kind of chicken that you'll want to keep within its own brood, away from other chicken breeds and your own pets. They're not going to be that great around children, either, so keep this in mind if it's been a family dream for a while to own chickens.

If you hope to do some chicken watching, though, they can be a fun breed to watch during the day. They're great foragers and can be overly curious at times as well, which could get them into trouble. Just make sure that your backyard has enough space to let them roam around during the day, looking for bugs and seeds.

How to Raise Your Rhode Island Red Chicken

One good thing about raising your Rhode island breed chicken brood is that they're pretty low maintenance. This is largely due to the fact that they're really good at foraging for their own treats so that they won't rely on you too much for their food. They will need a good starter feed at the beginning of their life, but once they have reached adulthood, they'll be happy enough with a laying feed without too much else.

If you want to make sure that those eggs are large and high quality, make sure that they're getting enough calcium as well. They're hardy, which means that while they don't lay as many eggs during the winter, they can easily withstand the cold without much fuss. Make sure that their coop is big enough, though, because they need quite a bit of space.

All chicken breeds come with their pros and cons. Let’s take a look at what these are for the Rhode island red.

Because the Rhode island breed can be territorial, they're a good choice if you are banking on having a small, exclusive flock. They are hardy throughout all yearly seasons, and they have one of the highest egg productions that you can get. They're low maintenance in regards to feeding because they like to wander around the garden and forage.

If you're big on being free-range, then your Rhode island reds are going to love you. This is because they're better to be let out for as much of the day as possible to roam free before being let back into their coop at night. If you are able to provide them with this type of space, you will be able to reap the rewards in the form of great looking eggs.

Because they aren't the broodiest of birds, you don't have to worry about them hiding eggs away to sit on. On the flip side of this, if you happen to get a couple in your brood that is broody from time to time, they follow through on their egg sitting and end up being excellent mums.

The biggest drawback to having a brood of Rhode island reds is their naturally aggressive nature. There’s no hiding the fact that they are one of the more aggressive breeds, and they definitely don’t like to be handled by humans too much. While the hens can occasionally be laidback, most of the roosters are going to give you quite a hard time.

This means that if you have children, you’ll want to avoid keeping Rhode island red roosters. In fact, this chicken breed is best known for being used in cockfighting. This means that they are bred to be bullies, and can even turn on one another at times as well. They’re great outdoor birds, and great if you have a lot of space to deal with them in. However, if you don’t, then you might want to consider another breed that isn’t so troublesome when talking about their behavior.

Is the Rhode Island Red Chicken Right for You?

If you’re trying to find a brood of chickens that are going to supply you with fresh, healthy eggs all year round, then the Rhode islandbreed is going to be one of your best choices. They don't require a lot of maintenance to keep, they can withstand even some of the coldest winter months out there, and they are a great choice if you believe in keeping your chooks free-range most of the time.

However, if you don’t have a lot of experience in keeping chicken breeds, the Rhode island breed might be a tough one to start with, because they're going to put you through the wringer in terms of their demeanor. Make sure that you weigh up the pros and cons, and remember that this isn't a great breed if you've got children and want your chickens to double as pets as well. If egg production is your priority, however, then go for it.